Uluru and the Olgas

21 August - Bush Camp at Salt Creek, 100 odd kms from Kings Canyon
Very near our destination of Uluru now, just a short, 300km detour to Kings Canyon today and tomorrow. Many people are surprised that Uluru is not actually at Alice Springs. Have a look at a map! It is a fair haul south west, but the roads in the NT are very good, particularly considering the light traffic they carry.
For once, this camp is not overly crowded. Just three other travellers have pulled in by sunset. There is a real protocol to these camps. The 'done thing' is to stroll about and greet a few fellow campers. Often paths have crossed before and acquaintances from previous camps are welcomed like long-lost friends. People are universally pleasant and friendly. Travel stories are swapped, technical details of caravan and tow vehicle rigs are compared and discussed in some detail. And yes, there is a certain amount of “mine is bigger than yours”. Not too much of a problem for us, 'cause our van is always the smallest around. Many Nomads have rigs that would easily top the $150K price tag.
According to statisticians, the real Baby Boom only started this year. What they have missed in their calculations are the hordes of early retirees like us who have been on the trail for a few years now. What will it be like in the next few years when those who have waited it out until 65 to retire, hit the road?
22 August – Kings Canyon Resort – $$
Disasters never seem to happen in isolation. They love to team up and attack us in two or threes. Admittedly, our first problem this morning wasn't actually ours. Around the camp fire last night, we had made the acquaintance of a mixed bag of European backpackers, travelling in a beat-up old Mazda van. There was a young French guy who was riding his bicycle from Darwin to Adelaide but found it too cold at night, a scruffy-looking Austrian and his Slovak girlfriend. Not as bad as they sound, they were out of luck this (or maybe in luck) morning. Their van had a fuel pump problem, or at least that was the professional diagnosis of the Nomads (including us) who tried to get them started. To cut to the chase, the scruffy Austrian rode on with us the 120 kms into Kings Canyon to seek help. BUT, just 20 km down the road... bang, thump, we had another flat, on the car this time. 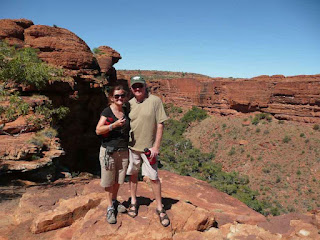 After consulting the RACV on the phone and the local Mr Fix-it at Kings Canyon, our scruffy Austrian friend decided on the very expensive option of a tow from the RACV into Yulara. A tow of some 300 kms. He was eventually able to hitch a ride from Kings Canyon back to his mates, left behind at the Salt Creek Rest Area, to meet the tow truck, although for a while there it looked as though we were going to have to drive him back. To put all this in context, for those who have never been here, Kings Canyon is basically a caravan park, motel/hostel and a Roadhouse. 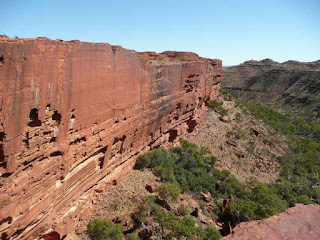 All was eventually well with our tyre, which was repaired by a tag team of an Indian and Kiwi in the rough, but fairly efficient, outback 'tyre emporium' of Kings Canyon. We then checked into the caravan park (only our third since leaving home) and spent a pleasant afternoon clambering around the 6 km Kings Canyon rim walk. This walk is highly recommended – tough to begin with – climbing up to the top of the canyon, but amazing views once you get there, plus that thrill you get when you've achieved something that has been described as “difficult” in half the time suggested. 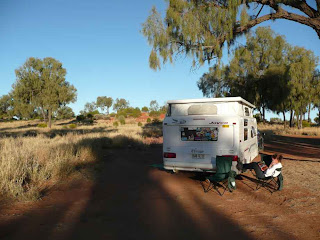 Yet another tough day at the office.
Posted by Paul and Janita at 12:40 AM