Rockets in the Desert

29 August - Bush Camp, 30 km west of NSW Border
The railway line near our camp is reasonably busy for such a remote location, with trains hauling minerals from Broken Hill to Port Pirie. The Barrier Highway through here to Broken Hill is a bit of a 'rat run' for traffic between Adelaide, Alice Springs and Sydney. Consequently, we have tucked ourselves well back in the bush, away from the road and the railway line. Seemed like a good idea at the time, but we didn't count on the sheep that have now found us and bleat intermittently from the scrub.
In South Australia, the weather and news people constantly refer to the 'agricultural areas'. When you travel south from the desert, it becomes obvious what they are referring to. The thin band of civilisation that skirts the coastline is a dramatic change from the long, lonely, flat stretches of road to the north. All of a sudden there are towns - real towns - with houses and shops, quite different to the desert settlements that are mostly just the usual Roadhouse and a few derelict houses. 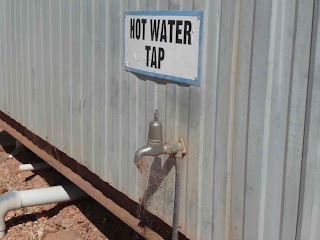 Somewhere very different again was Woomera. Located 8km from the highway a couple of hundred kms north of Port Augusta., it is a distinctly odd town. Built just after WWII as a missile test range, it played a major part in the British missile program. It was also the site of the launch of Australia's first satellite in 1964. Shot into orbit on a surplus US rocket, it was still a great feat, putting Australia 4th after Russia, the US and France to put a satellite into orbit. 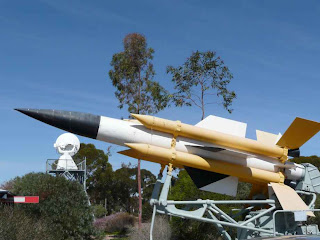 The streets of Woomera are wide, the houses uniform – it could be a nice town and very large by central Australian standards.. But it lacks a soul. Very military-base. Granted, we blew in on a Sunday and could have had a game of football or basketball on those wide streets if we'd chosen, with no fear of traffic, vehicular or pedestrian, but there was more to it than that. Houses have metal shutters, mostly drawn, few cars were in driveways, no clothes drying in the yards. There are sporting facilities, community centres, a pool, all the modern amenities, but no people? Moth-balled perhaps? Yet one is left with the feeling that the place has an extremely interesting past. A spooky present and an uncertain future. 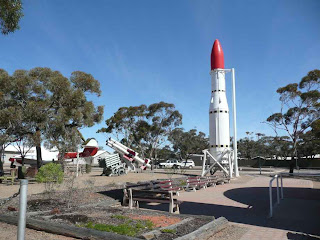 Another minor disaster was averted yesterday when we somehow managed to smell burning, as we plodded along the road at our regular 83km/hr. A quick inspection of the wiring in the van exposed a melted pile of plastic and wires that once was the switching board for the 12V system.
Nasty but not 'terminal'! We spent the night in a caravan park in Port Augusta so we were able to manage some running repairs and, so far, all seems well with our electrics.
Posted by Paul and Janita at 11:36 PM