19 August - Alice Springs
Bush fires raged all around “The Alice” as we made the long haul south, down the Stuart Highway to the legendary city at the centre of Australia. After one of the wettest summers in a lifetime right across the continent, the 'red heart' is decidedly grassy rather than ochre red. The dried-out grasses provide an enormous fuel load to feed fires and, with a few days of gusty south-easterlies to help, thousands of square kms of the centre have been ablaze. Bush fires in this country don't pose as much of a threat as those in more densely wooded areas in the south east of the continent, but all the same, they are a force to be respected. Smoke was the main threat to our travels. The highway had been closed for several hours in the past couple of days, but we were not held up at all.
Alice Springs is one of those places that really makes you wonder why? Why it was settled in the first place and why it grew and continues to thrive. With a population of more than 25 thousand, it is a fair sized city by Australian standards, particularly given its location 1500 kms from Adelaide and about the same distance from Darwin. In fact, it could be called the navel of Australia.
When the Americans arrived in Australia in 1942, they were astounded to discover that it wasn't possible to move their troops and equipment by rail from Adelaide to Darwin. The line stopped in Alice Springs. Even the road north to Darwin was little more than a track, until the Australian Army improved the road in 1941. It wasn't a sealed highway until the 1970s. 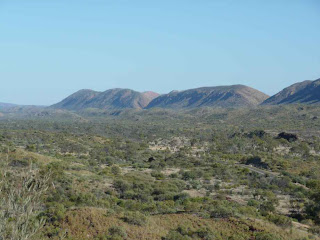 We arrived in town just in time to snag one of the last spots in one of the caravan parks. Nomads are here in force and the Henley-on-Todd Regatta is on this weekend. More on this iconic event later!
To the west and east of the city, the MacDonnell Ranges stretch for several hundred kms. On the seemingly endless plains of central Australia, these rugged red hills are simply spectacular! After such a good season, the water holes in the gorges are still full, reflecting the pure white river gums and the red of the ranges. Albert Namatjira captured these landscapes in his famous water colours. An interesting case was Albert. It will probably shock most Australians to know that he was the first Aborigine to be granted citizenship. That's right. Aboriginal Australians were not considered citizens until the early 1970s. This meant they had extremely limited rights. They couldn't vote or buy alcohol. Even Albert was considered a ward of the state prior to his citizenship and his family were not accorded that same right. 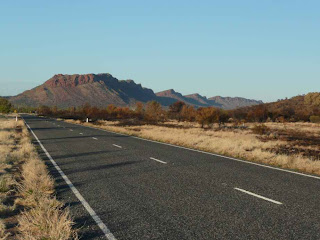 Namatjira's art perfectly captures the beauty of the remarkable landscapes of central Australia. It is art that westerners accepted and valued. His paintings are worth a small fortune today.
On the subject of aboriginal art. Not wishing to be politically incorrect, but we just don't get it! To be fair, we don't 'get' a lot of modern art either. What was Jackson Pollock on about, for example? The nicely arranged dots and lines of some indigenous art do have some aesthetic appeal, but to be honest, the underlying stories depicted in these works require more than a small stretch of the imagination. We just put it down to a cultural difference. What really amuses us is listening to the non-aboriginal art aficionados who frequent the these art galleries. They pretend to 'get it'! Right. That series of dots depicts the day the widgree people were walking along a dry creek bed and saw several birds eating the seeds of the giant omidee palm... and then they lit a fire and sat in a circle while the women gathered sticks for the fire. As we say – it must be a cultural thing and maybe we just don't have any! 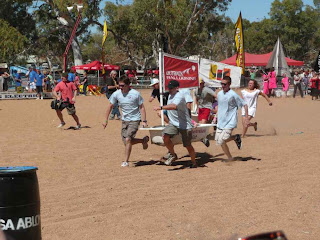 The Henley-on-Todd Regatta is billed as an Outback Iconic event and that it was! A morning parade up the Todd Mall in the centre of the Alice led the crowd of probably close to 4000 down to the dry bed of the Todd River. Boat races of all types filled in most of the day. Locals loved it. Tourists got right into it and at the end of the long afternoon, three large 'ships' fought it out on the river bed. It was run like a real regatta, but without the water. A great day of outback entertainment including that provided by the crowd!
Posted by Paul and Janita at 2:44 AM